Good grief! Talk about a suspenseful week on Sam Rayburn Reservoir! There was a ton of talented anglers from all over the country, and the turn out was pretty nice considering the gnarly conditions! Quite a few anglers made the trip to this spectacular lake a week in advance, and started pre-fishing to learn the lake and it’s crazy amount of vegetation life, as well as the deep drop-offs and hydrilla lined flats.

Sam Rayburn is definitely one of the most unique fisheries in the state of Texas and even the world, as it’s a prized lake for Largemouth bass, and anglers from all over venture for a shot at one of the hundreds of potential world records that lie in the depths of the reservoir. Due to some severe water level changes that occur seasonally and annually, it’s very hard to pinpoint your catch and be able to find it again.

The KBS crew huddled up at the Jackson Hill Cabins, located just inside the Jackson Hill Marina. Linda Rushing helped us out a lot and worked with our crazy arrival schedule to make sure we had everything we needed to get down to business. Jackson Hill Marina is located on the Northeast waterfront, just minutes from Cassell Boykin Park, where we had our captain’s meeting and Photo-Finish to display the winners. It’s a great location, and a relatively short drive to just about anywhere on the lake.

Jackson Hill Marina also has a quaint little restaurant next to the boat ramp, and the food is not bad, at all. A lot of people love the breakfast burrito, as well as the fisherman’s breakfast plate, which is a good chunk of food for only $5. It’s sure to fill you up and get you ready to go.

The craziest thing for the Kayak Bass Series, is this is their second event and the weather was such a royal pain, but the beauty is anglers prevailed and managed to catch some very healthy fish throughout the week, as well as tournament day. I mean, it was SNOWING on Tuesday for a little bit, and just downright cold and windy while we were there. Forecasts called for wind in the 6-10 mph range, and it just seemed to be in the 12-15 mph range all week, and at certain points you weren’t even safe behind islands or slipping into one of the hundreds of fingers on the lake. The air temperature pretty much stayed in the 28-50 degree range all week, while waters fluctuated from about 45-52 degrees throughout the lake.

With the weather against the anglers already, it didn’t help that the bass were biting very softly, so as your kayak was getting hammered by wind and waves, you had to attempt to feel a bite and capitalize. Easier said than done, for sure!

We did had a few cancellations due to the weather, as it was pretty bad all around us, with a good amount of snow causing for rough road conditions and in a couple cases anglers just not being able to make it out of their town.

Tournament day was definitely no joke. Early in the day, we had quite a few submissions and even a limit around 8am, so we knew it was going to come down to the wire with as much activity as we saw. Everyone was able to keep up with the live stream of submissions in the iAngler Tournament App, and it definitely kept it exciting, as the lead changed multiple times throughout the day.

Robert Field did an excellent job of monitoring submissions and relaying back to the anglers if their submission had to be edited in any way. With the iAngler Tournament App, the tournament director is notified of every submission in real-time, and has the opportunity to approve or disapprove any submission, based on the KBS CPR Rules criteria. This allows everyone ample time to make corrections if needed.

With the last fish submission just shy of 3pm, and the KBS crew hustling around to prepare for the Photo-Finish at 4pm, it literally came down to the wire. Unfortunately, there was a disqualification, due to an eye being entirely covered, and it was probably more heart-breaking to Robert as he had to relay that information to the angler. It’s never easy breaking news, but the day had to go on. 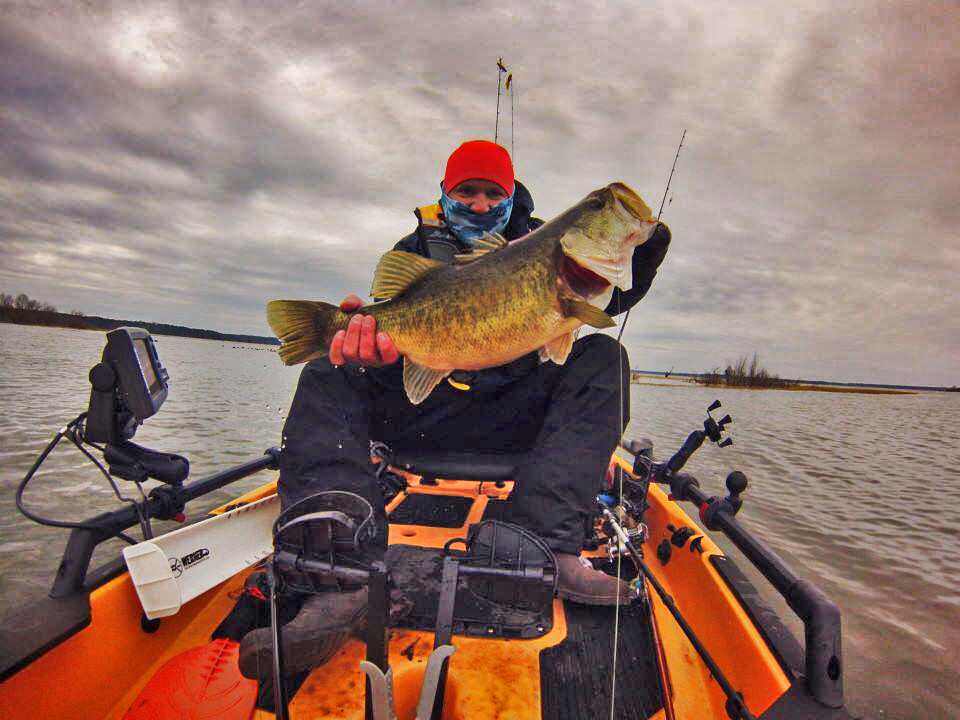 Jason Delfraisse managed to stack the inches just high enough to capture 1st place, and it was without a doubt a solid win, as he recently pulled 1st in another tournament. You’ll be able to hear more from Jason in the upcoming March issue of YakAngling Magazine.

There was a total of 84 fish submitted and 32 of the 48 anglers in the field were responsible for that push! We had a wide variety of anglers from all over the country that compiled the top places for Sam Rayburn!

This message is only visible to admins.
Problem displaying Facebook posts. Backup cache in use.
Click to show error
Error: Error validating access token: The session has been invalidated because the user changed their password or Facebook has changed the session for security reasons. Type: OAuthException